The French Language in the world by 2050 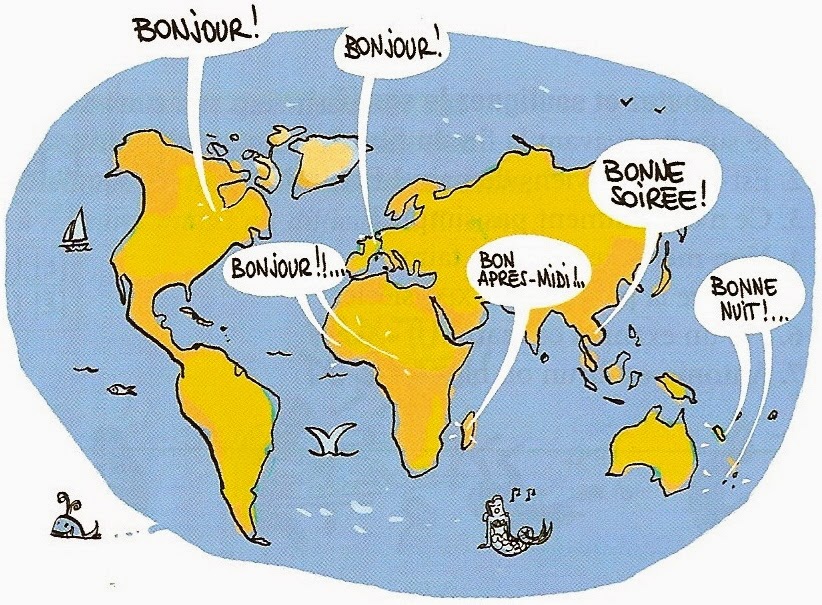 French is the world’s fifth largest language by number of speakers, according to the 2018 report of the Organisation internationale of la Francophonie (OIF) [International Organisation of La Francophonie]. And that’s not all! Third business language in the world, the second language learned as a foreign language… French is indeed a language of the future.

WHO ARE FRANCOPHONES AROUND THE WORLD?

French is the only language in the world that can boast of being, just like invincible English (360 million native speakers and more than a billion as a second language…) used on all 5 continents!

French is the fifth most widely spoken language in the world after Mandarin, English, Spanish and Arabic. It is the official language of 32 countries. This represents about 300 million Francophones worldwide.

Global distribution of Francophones in 2018:

As such, most speakers of French on a day-to-day basis are on the African continent. On its own, Africa accounts for almost 60% of Francophones.
It should be noted that the 2018 OIF report assessing the number of Francophones in the world was based on censuses and quantitative surveys produced for 106 countries and territories. A “Francophone” meets the following three conditions:

HOW IS THE FRENCH LANGUAGE USED AROUND THE WORLD?

What use do Francophones make of the French language? This global Francophonie takes in very different realities and issues. First, the frequency of its use varies from region to region. While 300 million people use Molière’s language every day, not all do so in the same way. The uses of French differ depending on whether it is used in a family setting, at school or at work… The OIF thus speaks of “levels of Francophonie”.

As such, the Francophone space includes both countries whose speakers use French in their daily lives or in their communications, but also those where French is an official language mainly used for professional, administrative or institutional purposes.

THE FRANCOPHONE SPACE DISTINGUISHES 3 USES OF THE LANGUAGE:

As a result, the Observatory’s report identifies as Francophone all of the inhabitants of countries where French is the official language, but reality is more complex. First of all, French can naturally rub shoulders with other languages. Although the Democratic Republic of the Congo may well be the largest French-speaking country in the world (while France has 66 million Francophones, the Democratic Republic of the Congo is second on the list with 42.5 million people), many of its inhabitants prefer lingala to French. As a result, the challenge is to understand what place French occupies, particularly in teaching.

WHAT PLACE DOES FRENCH OCCUPY?

First of all, it should be noted that the French language is very present in international relations: once a diplomatic language par excellence, it is one of the official languages of several major bodies such as the United Nations, NATO, the International Olympic Committee, the International Red Cross, etc.

French is considered to be a world language, because it is taught in all countries of the world. This means that it is a foreign language learned by more than 50 million people. In addition, French is a language of instruction for more than 80 million people in 36 countries and territories, more than half of whom are on the African continent.

As such, according to the OIF, 73% of children learning in French around the world are located in countries in sub-Saharan Africa or the Indian Ocean. Of the 29 countries in the French-speaking world that have French as an official language, 21 are in sub-Saharan Africa. In 13 of these countries, French is the main language of instruction. In the other five, it is combined with other languages. Formerly a colonial language, French often serves only as a second or even foreign language.

Given the correlation with its economic dimension, the quality of Francophone education is therefore a central issue in Africa. Between 50% and 82% of the respondents in the OIF report believe that being Francophone is essential for them, both personally and professionally. An ability to express oneself in French is seen as an additional asset when looking for a job. In terms of the language requirements of businesses, in fact, French is second only to English.

Finally, French is the second most widely taught language in the world. It is indeed in Africa that French is the most learned, with 23 million learners. Next comes Europe with 10.5 million learners. It is worth noting that in the English-speaking countries of Europe, French is the first foreign language studied. It is in second place in the German-speaking countries. Finally, the Chinese are becoming increasingly interested in French with a clear objective: economic establishment in Africa. In recent years, the continent has been popular with Asian investors.

To find out who is learning French in the world, check the tables posted online by the OIF:

What’s the point of learning French? Molière’s language is an asset in terms of one’s professional career. France is the 5th largest trading power in the world. As a foreign language learned on all continents of the world, French occupies a significant place in trade and economic relations. It represents a true economic impact.

It is a means of communication used by about thirty countries in their international exchanges (hence the importance of impeccable translations, because being bilingual does not always mean an ability to translate well). We speak of “economic francophonie.” Mastery of French is increasingly a significant advantage in gaining access to certain markets.

As such, if we take the example of the audio-visual sector, the international French-language media occupy a prominent place while contributing to the language’s dissemination. The production of films, series, documentaries, etc. represents an increasingly creditworthy market. Major players in the sector are not hesitating to invest. A considerable volume of international media is delivered in French (TV5 Monde Afrique, Arte, Canal+, BBC News Afrique, Ici Radio-Canada, TFO…). The challenge is to reach out to the millions of Francophones.

Present in many countries, in education, media, commerce and administration, French offers a considerable advantage for Francophone businesses in their international exchanges. It is the world’s third most widely used business language, after English and Mandarin. No less than 20% of world trade takes place between French-speaking countries. However, the French language covers the most territories (for comparison, Mandarin is only spoken in China).

To learn more about French as a business language, read the OIF article.

French is also very present on the internet, where it is the fourth language spoken on networks! In a crowded digital landscape, Francophones use their language as a priority means of communication. French is even apparently third in terms of traffic.

Key figures of the Francophonie

34% of Francophones live in countries in sub-Saharan Africa and the Indian Ocean.

Along with English, French is the only language spoken on all five continents.

English and Mandarin are now the most widely spoken languages in the world. But what will be the place of French by 2050? The number of Francophones is expected to triple in the next thirty years, and French will become the second or third international language!

According to OIF estimates, there will be some 715 million speakers in 2050, or 8% of the world’s population (compared to 3% at present). 80 million people will speak French in Europe and 10 million will speak it in Canada. Africa, for its part, will have nearly 250 million French speakers! This represents 70% of the world’s Francophones.

Not surprisingly, Africa is thus destined to become the area with the most French speakers, according to the OIF. Its role is predominant: Africa will account for more than 90% of young Francophones aged 15-29. A real springboard for the Francophonie, the continent’s demographic explosion (population expected to double by 2050 according to the UN) is indeed a key for increasing the number of French speakers. Given the growth of the African continent, the number of Francophones worldwide could rise to between 450 million and 750 million by 2070…

President Emmanuel Macron, in a speech delivered on the International Day of La Francophonie, 20 March 2019, stated that “France is only one part of the active Francophonie, and is aware that it is not alone in carrying the fate of French.” He hailed the idea of an “open Francophonie,” rich in its plurilingualism.

With nearly 300 million speakers and a steady increase, French is one of the 5 most widely spoken languages in the world. French is the fourth language on the internet, and, along with English, the only language present on all 5 continents. The development of the African continent has every chance of making French the second most widely spoken language in the world! During his speech to the Académie Française on 20 March 2019, Emmanuel Macron declared that “French has emancipated itself from France, it has become this world language, this archipelago language”, proof of the will to make French an international language.